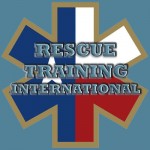 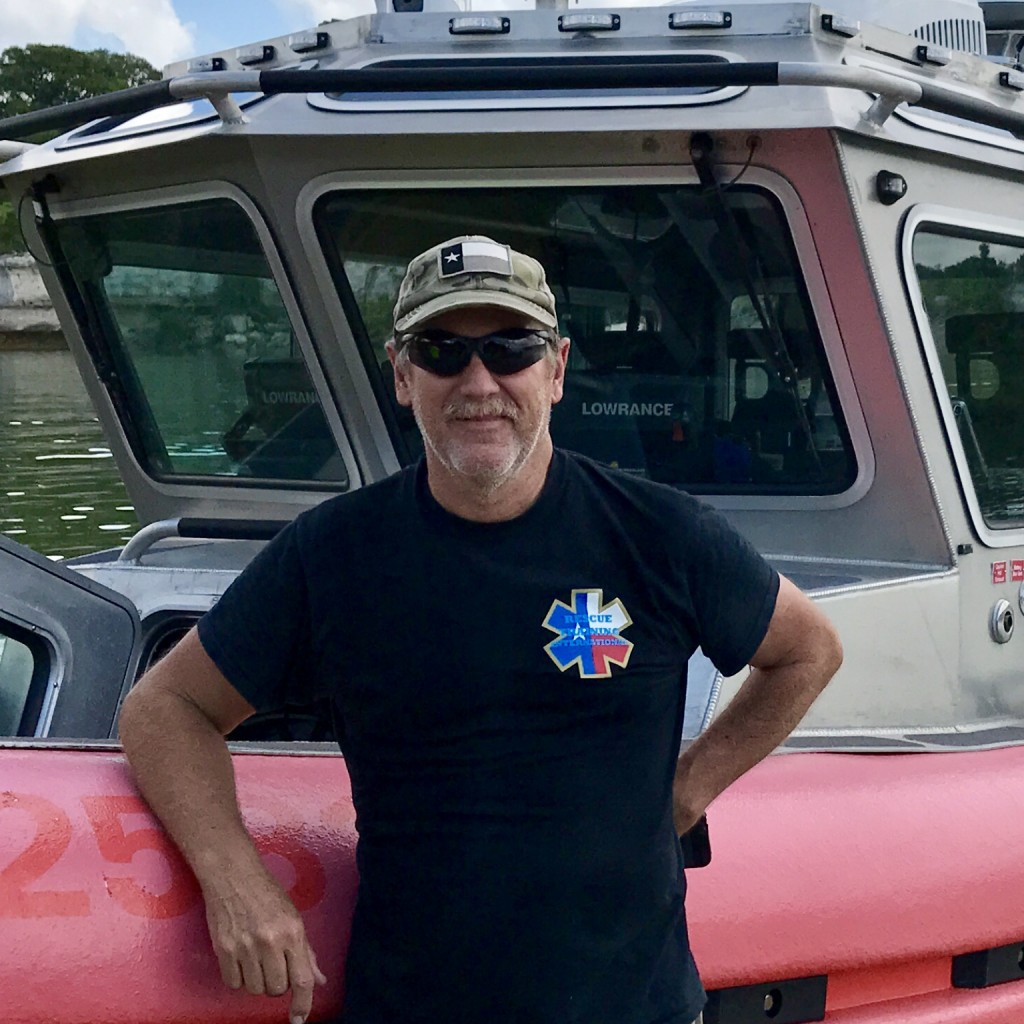 Wesley Meyer
Founder / Master Instructor / RETIRED
Start Date: 7/5/1974 - City: New Braunfels - State: TX - Country: USA - Lead Instructor: All RTI Courses
Wes has over 54 years in the rescue field specializing in water, boats, vertical, cave, ground search and survival. Retired from the New Braunfels Fire Department as a Battalion Chief, he was instrumental in the development of the Swiftwater and Vertical rescue program there. Wes wore many hats in the fire service from entry level volunteer fire fighter he worked his way through every rank to Battalion Chief including Emergency Medical Technician, Peace Officer and Arson Investigator. He has been a guest instructor at the Texas A&M University Municipal Fire School, feature guest speaker at National and International conferences, consultant with FEMA for development of rescue teams in international settings, as well as consultant and instructor for numerous emergency service providers in the development of specialized rescue teams. Wes is the owner and Master Instructor with Rescue Training International and a past Master Instructor and Instructor Trainer with Rescue 3 International. He has been the Chief of Rescue Techs and Alamo Area SAR, Rescue Specialist with several Volunteer Fire Department. Developing programs tailored to the needs of the individual or agency he works with. He has also developed several training courses for Lake, Bay, Surf, Flood, Swiftwater, PWC, Boats, Vertical, All Terrain Vehicles Utility Vehicle and cave rescue. His range of Instruction now includes the US, Canada, Mexico and Europe. Wes was presented the prestigious Higgins & Langley 2001 International Award for his assistance with the development of the Texas State Swiftwater Strike Team and his teams response to the Tropical Storm Allison disaster in Houston, Texas. He has several other awards and decorations including the “Unsung Hero” award from the City of New Braunfels for rescuing 9 persons during the October 1998 flood in New Braunfels, Texas, USA and a Medal of Valor from Braunfels, Germany for a river rescue including family members from Braunfels Fire Department.
Click for background information. 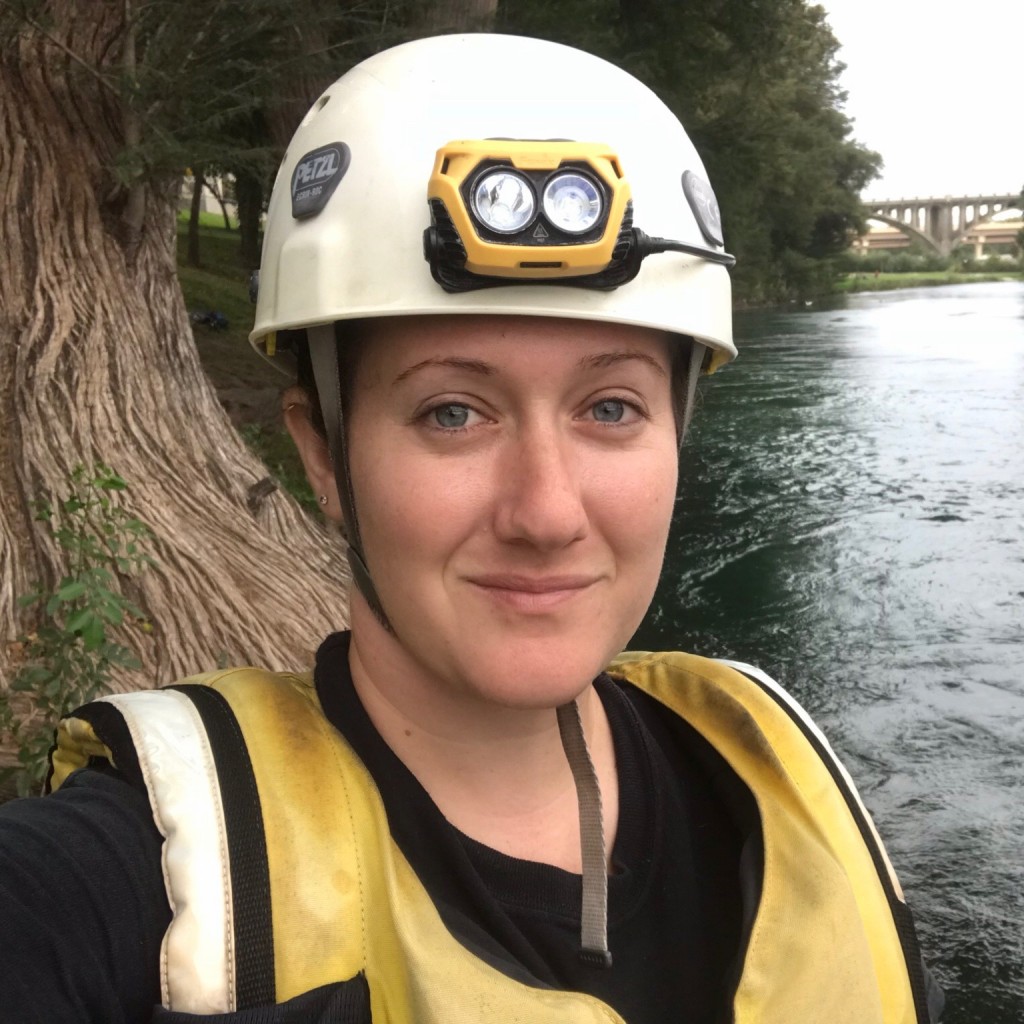 Camille Meyer
Owner / Chief Instructor
Start Date: 7/1/2000 City: New Braunfels State: TX Country: USA Lead International Instructor in FAST, FAST PWC, FAST RBO, PWC Surf, Cave, Vertical, Ground Search, and Survival.
Camille has served our country in the US Coast Guard for a little over 5 years. She made rank as an Operations Specialist Petty Officer 3rd Class and has also completed training as a Surface Rescue Swimmer, Boat crewman, Helo/Boat ops, Marine Watchstander, Search and Rescue Fundamentals, and was completing training as a Law Enforcement Officer at FLETC Charleston until an injury postponed the training. Camille was last stationed at USCG Sector New Orleans under the 8th Atlantic District based in New Orleans, Louisiana as a communications unit watch stander (heavily involved maritime emergency operations and dispatching) and was involved in advanced operational planning applications, intelligence coordination and case management functions. During her time at Sector New Orleans she conducted over 250 search and rescue cases, and was directly involved for 25 lives saved. She was also on duty in the Communication Center and was responsible for numerous lifesaving and emergency response communications the day the BP Oil Rig exploded. She was honorably discharged in November 2011 after her service was completed. During her service she served on the East Coast, West Coast and Gulf of Mexico. Camille has completed every course RTI offers making her one of the few RTI Master Technicians. She has been involved with RTI since its inception; starting at a young age acting as victim, then assisting with the courses before finally becoming an instructor.
Click for background information. 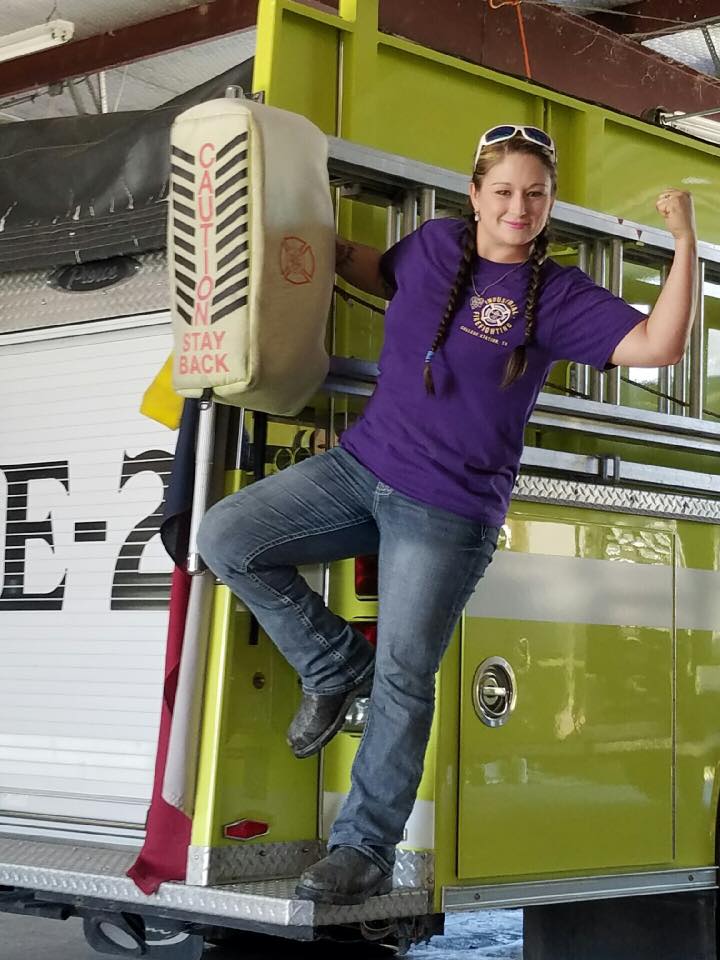 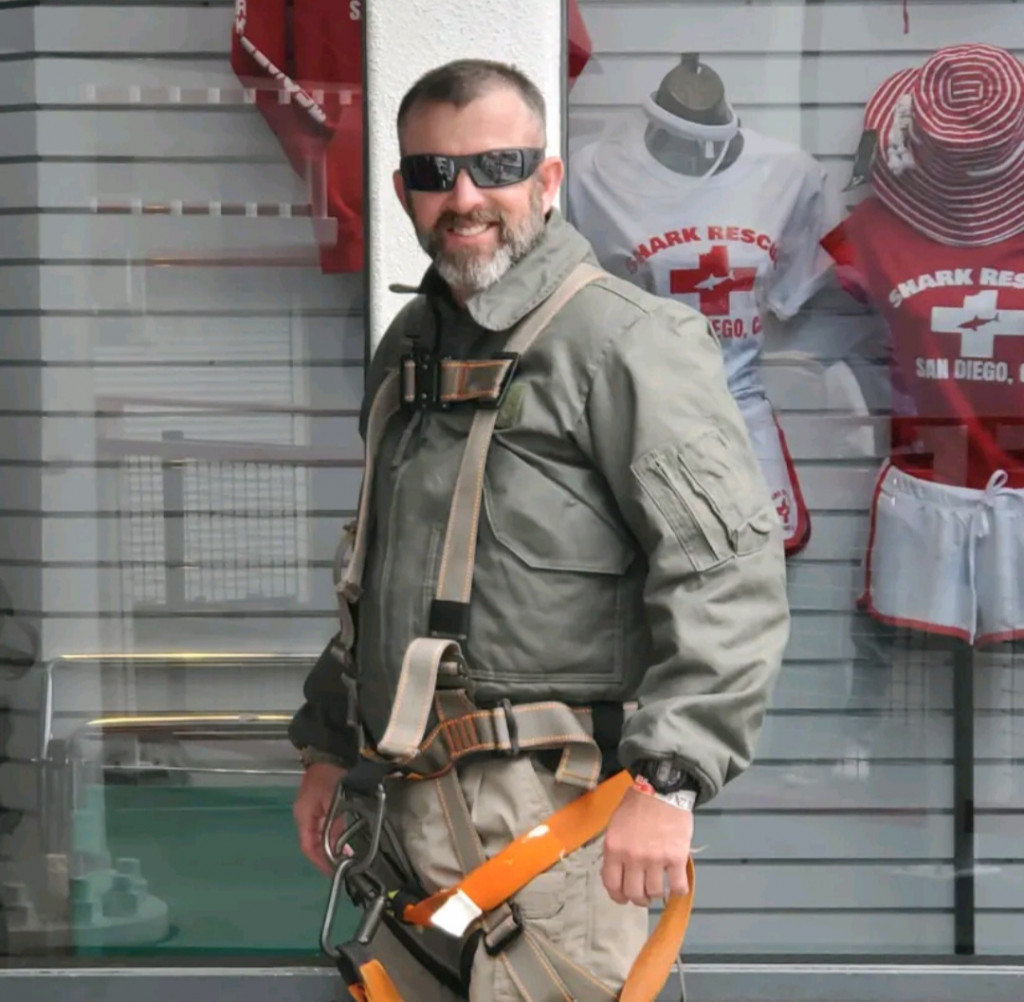 Grady Grammer
Apprentice Instructor Lake Rescue Boat Technician 1, Ground Search And Rescue 1
Start Date: 07/06/2021 - Apprentice Instructor - LRBT 1, GSAR 1
Grady served in the United States Navy from 1996-2018 retiring as a Senior Chief Petty Officer. During his career he earned his Enlisted Surface Warfare Specialist qualification, advanced shipboard firefighter, flight deck firefighter, conning officer, Craftmaster, small boat coxswain, flight deck officer, landing signalman enlisted, well deck control and docking officer, safety officer, quality assurance inspector, waterfront readiness duty officer, command duty officer, and a variety of other shipboard and shoreside qualifications. He served in the capacity of Command Safety Leading Chief Petty Officer, Public Affairs Officer, Emergency Management Coordinator, Senior Enlisted Advisor, Casualty Assistance Calls Officer, and Departmental Leading Chief. During his career Grady deployed several times including being the first ship on station during the Kosovo Conflict in '99, 3 times to the Persian Gulf during Operations OEF and OIF, and Korea for JLOTS exercises with the Korean Marine Corps and Navy. During his career Grady worked with several Fire Departments across the country including the Ingleside On The Bay VFD, Ingleside VFD, Turtle Creek VFD, Howard County Fire/Savage VFC, Ann Arundel County Fire/Arnold VFC, and Naval District Washington Fire/ US Naval Academy Fire Department. Additionally he attended and graduated from the CERT Academy in San Diego County, CA under the umbrella of the San Diego County Fire Authority/CALFIRE. During his time as a CERT Team Member he deployed to Butte County during the aftermath of the Camp Fire as a dog handler, and several welfare check evolutions during Santa Anna wind events. Grady is also a member of Team Rubicon where he worked directly with state and local agencies during the Lilac Fires in San Diego County, CA. He as been an active member of the Boy Scouts of America since 1985, earned the rank of Eagle Scout in 1992, has served in many different leadership roles from the Council to Troop levels, and is currently an Assistant Scoutmaster in Bullard, TX. Grady attended Central Texas College where he completed his Certificate in Emergency Management. His present qualifications include Lake Boat Rescue Technician 1, Flood and Swiftwater Rescue Technician, Ground Search and Rescue Technician 1, and Ground Search and Rescue Technician 2. He is a member of the Bullard Fire Department where he is the Rescue LT with additional qualifications of FF1, ECA, Structural Collapse Technician, K9 Handler (with a new SAR dog coming online in the next 15 months), Agro-Rescue, WMD, ARC Adult and Pediatric First Aid/CPR/AED Instructor, CPR/AED for the Professional Rescuer Instructor, CPR/AED for the Healthcare Provider Instructor, Stop the Bleed Instructor, and is the Chief Advisor for the Bullard Junior Firefighter Program. Grady is located in Bullard, Texas and always looks for a means to educate, demonstrate the how, guide the skill, and enable the citizens in his area in the realm of emergency preparedness so they are better prepared in the event of any emergency.
Click for Background 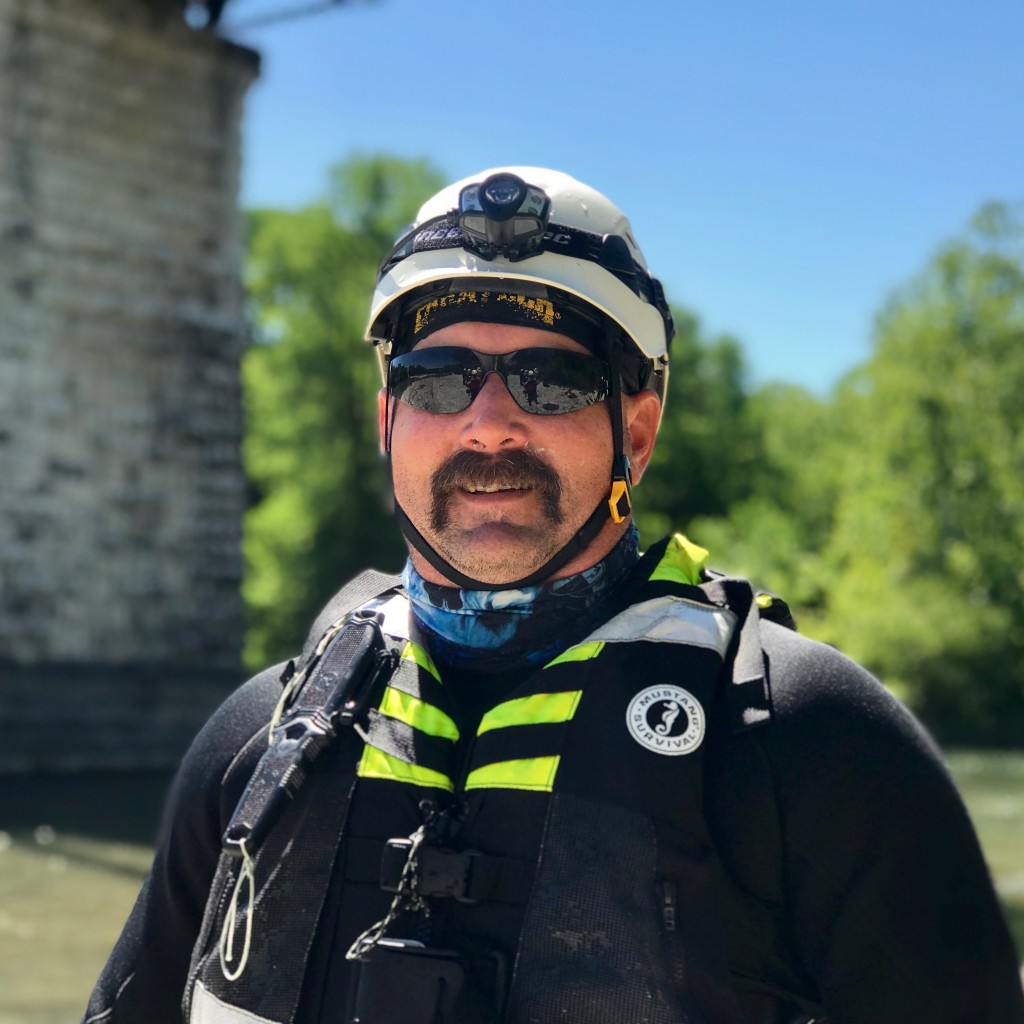 Ray Gregory
Lead Instructor - FAST 1, FRBT 1, VRT 2, Confined Space, GSAR 2, Wilderness Survival
Start Date:07/13/2010 - Lead Instructor - FAST 1, FRBT 1, VRT 2, Confined Space, GSAR 2, Wilderness Survival - Victoria, Texas
Ray is a paramedic engineer with the Victoria Fire Department. He has been involved in Search and Rescue for many years. Starting out as a Swiftwater Technician, he has worked his way up t0 lead instructor and team leader. He has certifications in FAST1, FAST2, RBO1, VRT1, VRT2, GSAR1, GSAR2. Ray is a lead instructor in FAST1,FAST2, RBO1,VRT1 and GSAR1. He was the Swiftwater Rescue Team lead for VFD and is also on the Technical Rescue Team. Ray has been vital in forming the Cuero EMS rescue team. Ray is a prior U.S Marine and was Honorably Discharged after serving 8 years. Ray was previously an active member of the Texas State Guard, where he has been on several SAR missions as a team leader and team medic. Ray maintains his skills throughout the year by attending classes and training sessions, which sometimes become real-life rescues. One lucky piglet was saved by his recent adventures. In all seriousness, Ray is passionate about sharing his expertise and knowledge with anyone interested in learning different survival and rescue skills.
Click for background information. 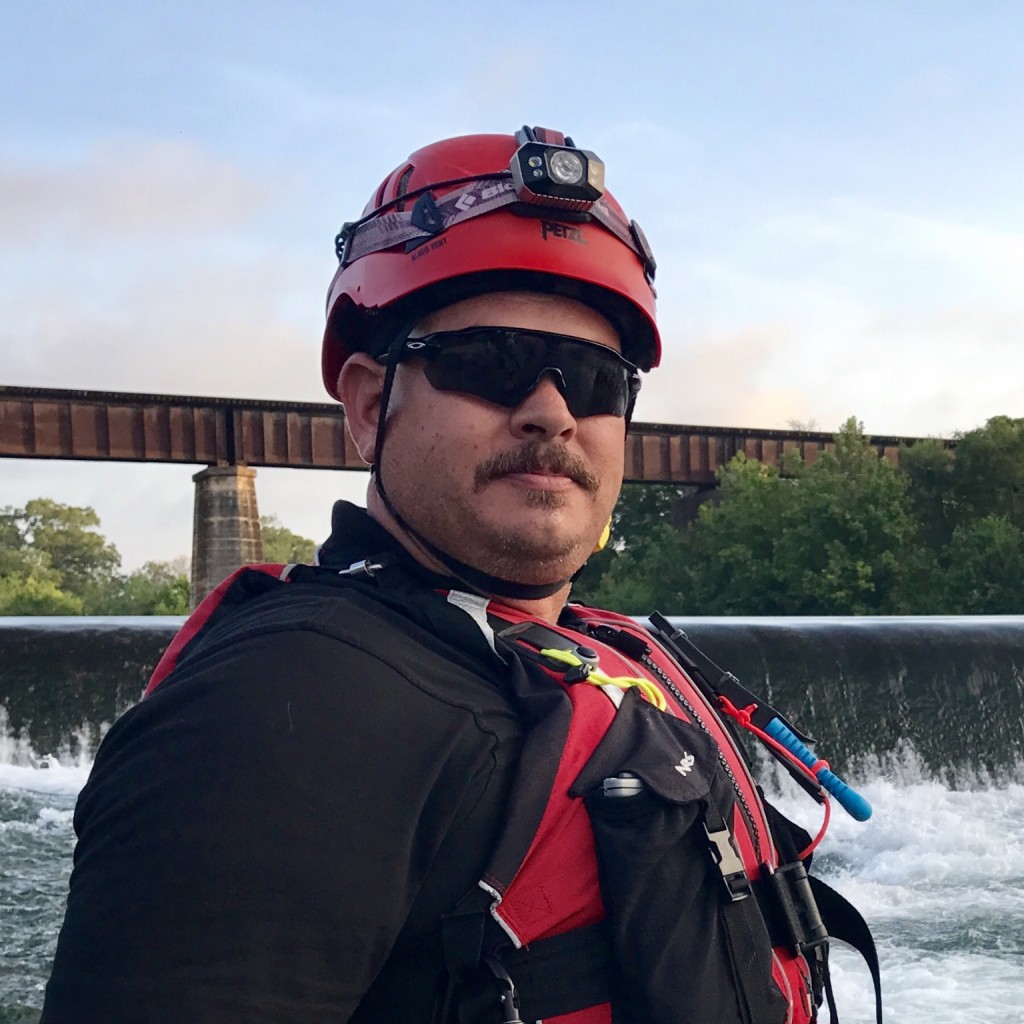 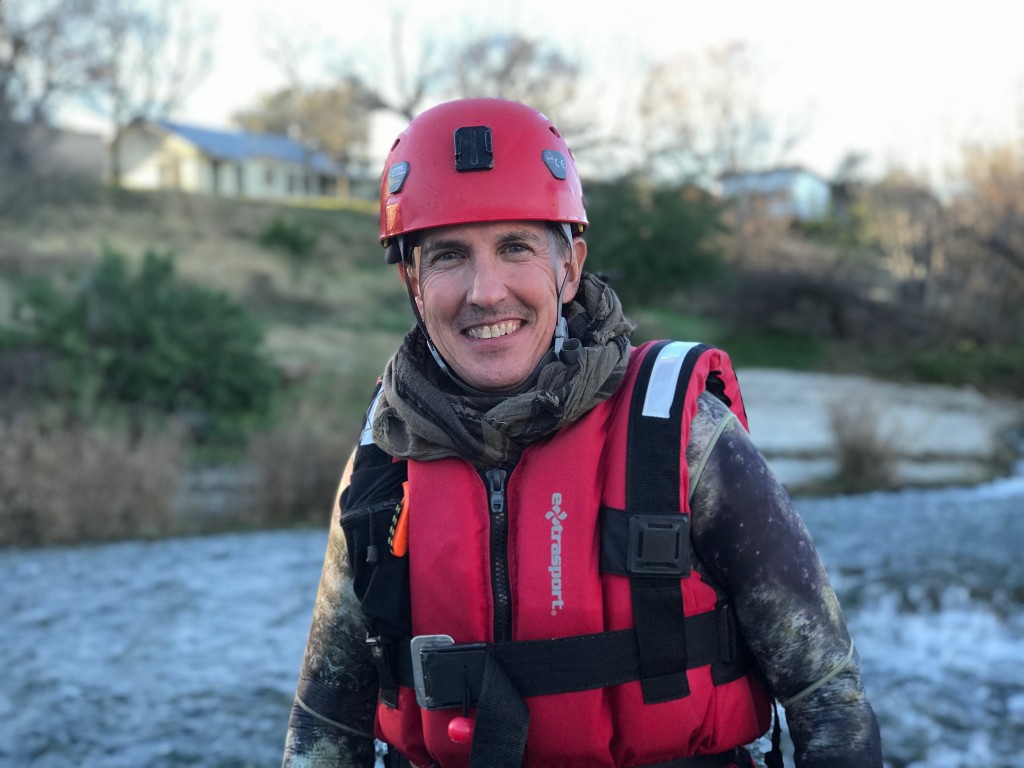 All RTI Instructors are required to have been active in their respective fields of instruction. They have a background and experience in Search & Rescue and know what it’s like to be in high risk and high stress situations where lives may be on the line. Each instructor will take the time to introduce themselves and a history of their accomplishments at the beginning of each class.

We are very much opposite of Train-The-Trainer in our instructor qualification process. Our instructors all have a strong passion for what they do and it shows in every class they teach.

If you have questions about the Instructor application or training process, don’t hesitate to ask for further details.

If you are interested in joining the team, fill out our application in the link below and email it to us at Office@RescueTI.com